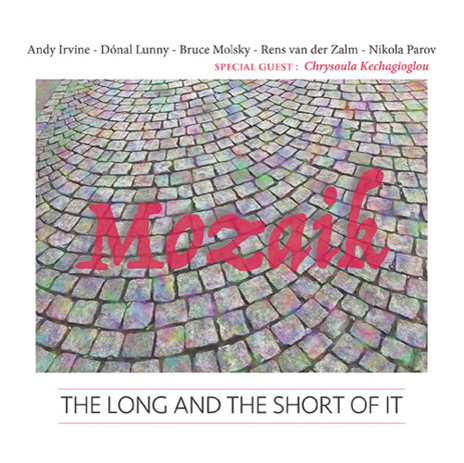 MOZAIK is the band that Andy Irvine had dreamed of and his long time musical friends gathered together in Australia in early 2002 to form this multicultural super band. Andy Irvine has been travelling around the world since his youth and one of his great ideas was to collaborate with so much of the dierent music that had inuenced him. American ddler and 5-string banjo player Bruce Molsky brought the Old Time tunes and songs from his native country, Dónal Lunny was the unquestionable percussive powerhouse of the gathering on bouzouki, guitar and bodhrán. Bulgarian/Hungarian musical genius, Nikola Parov brought all manner of exotic instrumentation to the mix (including gadulka, gaida, kaval, gardon, utes, clarinet, guitar and nyckelharpa) and Rens van der Zalm, undoubtably one of the best all round musicians on ddle, mandolin, low whistles, uillean pipes and guitar, brought with him his quintessential Dutch attention to detail in his lovely melody lines.

MOZAIK recorded this 3rd album outside Budapest during the month of September 2015.

This time they had a beautiful traditional singer Chrysoula Kechagioglou as a guest and she brought the warm wind and colour of her native Greece into the band for this album. Andy and Bruce also take lead vocals and the instrumental tracks composed by Dónal and Nikola (with the magnicent voice of Ágnes Herczku) are in this album. It has taken more than four years for this album to come to fruition but here it is at last and that’s about the long and the short of it!